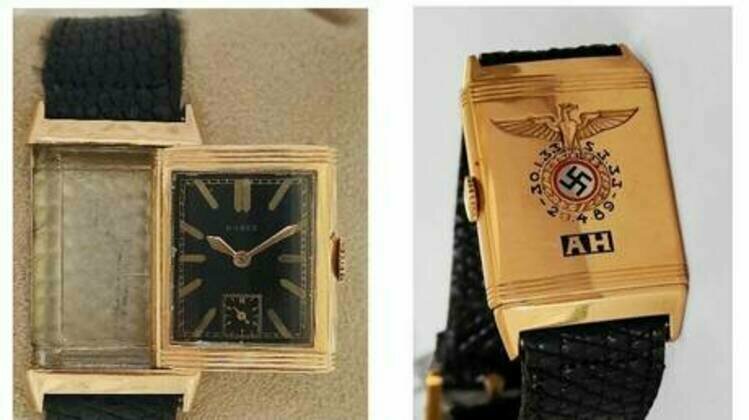 The Nazi leader's historic timepiece brought a winning bid of $1.1 million in a US auction that was condemned by Jewish groups

A trove of Nazi artifacts offered by a US auctioneer - in defiance of Jewish groups that called for the sale to be canceled - generated millions of dollars in winning bids, including $1.1 million for Adolph Hitler's swastika-engraved watch.

The gold Huber watch featuring a Nazi eagle and the initials 'AH' sold for $1.1 million at a two-day auction that ended on Friday. Chesapeake City, Maryland-based Alexander Historical Auctions also reported such winning bids as $290,000 for Hitler's ceremonial desk set, used in the signing of the fateful Munich Agreement of September 1938, and $27,500 for a gold ring that Hermann Goering presented to German flying ace Hans-Joachim Marseille.

The auction went ahead despite opposition from Jewish leaders, 34 of whom reportedly signed an open letter urging Alexander Historical Auctions not to sell the Hitler watch, which they called "abhorrent." However, Mindy Greenstein, senior vice president at the auction house, reportedly told German media outlets that the sale was meant to preserve history. "If you destroy history, there is no proof that it happened," she said. "Whether good or bad history, it must be preserved."

READ MORE: Under the Wolfsangel: The uncomfortable truth about radical ideologies in Ukraine

Before the two-day sale, Rabbi Menachem Margolin, chairman of the European Jewish Association, said the auction would give "succor to those who idealize what the Nazi party stood for." He claimed, too, that the sale would enable buyers to "titillate a guest or loved one with an item belonging to a genocidal murderer and his supporters."

Some of the other items featured in the sale included a watercolor painting by Hitler, which fetched $27,500, a concentration camp photo album, which went for $3,000, and a blue dress worn by Hitler's companion, Eva Braun, which attracted a winning bid of $2,500.

The watch was sold far below its pre-auction estimate range of $2-4 million. However, some items commanded far higher prices than expected. For instance, a golden eagle figure that hung above the entrance to Hitler's bedroom in the Reich Chancellery sold for $200,000, exceeding a pre-auction estimate of $15,000-20,000. The dog collar for Braun's Scottish terrier, emblazoned with gold swastikas, went for $4,500, above the $3,000-4,000 predicted.

The sale also featured non-Nazi items, including a document signed by the Soviet leader Joseph Stalin, which sold for $3,750, and an official letter signed by China's Mao Zedong, which secured a winning bid of $16,000. A Confederate soldier's crucifix worn during the American Civil War went for $4,250, well above the auctioneer's estimate of $300-400.