US Muslims See Rise in Islamophobia 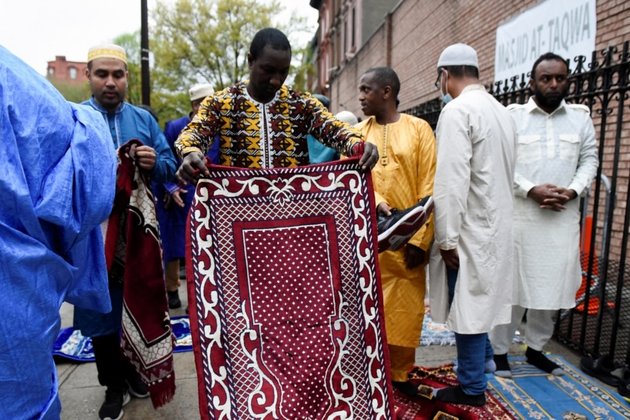 After a six-year hiatus, U.S. President Joe Biden last week resumed the 22-year-old tradition of hosting an Eid celebration at the White House.

'Muslims make our nation stronger every single day, even as they still face real challenges and threats in our society, including targeted violence and Islamophobia that exists,' Biden told a group of prominent Muslims.

Biden's comments marked a significant change of tone from his predecessor, Donald Trump, who said in 2016, 'I think Islam hates us.'

Trump did not host a White House Eid celebration while president, though he did issue statements marking the annual Muslim festival and invited diplomats from Muslim-majority nations to the White House for iftar dinner during Ramadan in 2018 and 2019. 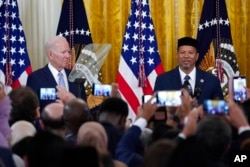 FILE - President Joe Biden, left, listens as Talib M. Shareef, President and Imam of Masjid Muhammad in Washington, speaks during a reception to celebrate Eid al-Fitr, in the East Room of the White House in Washington, May 2, 2022.

The shift in the White House's tone comes at a time when U.S. Muslims fear Islamophobia is on the rise.

Last week, the Council on American-Islamic Relations (CAIR) reported a 9% increase in the number of civil rights complaints it received from Muslims in the United States since 2020.

Huzaifa Shahbaz, an author of the report, told VOA the rise in complaints about Islamophobia coincided with the lifting of COVID-related restrictions and the reopening of workplaces, worship centers and restaurants.

Others echo CAIR's findings and point to other reasons as well.

'Over the last year, we've seen racism in the United States rise across the board as a consequence of the pandemic, the intensification of white supremacist groups, political polarization, and even though we have Trump out of the office, this rising climate of racism is still feeding the Islamophobia that exists really heavily in the United States,' said Khaled Beydoun, a law professor at Wayne State University.

For decades, a major source for the public's understanding of trends in Islamophobia came from a compilation of bias-motivated incidents, including anti-Islam and anti-Semitic acts, annually reported by the Federal Bureau of Investigation.

The FBI's most recent hate crime report, released last October, showed police departments recorded 110 anti-Muslim incidents in 2020, down from 180 in 2019. 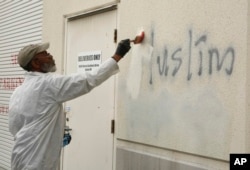 FILE - A man paints over racist graffiti on the side of a mosque in what officials are calling an apparent hate crime, in Roseville, Calif., Feb. 1, 2017.

The bureau's 2021 hate crime data are slated for release in the fall, a typical lag of several months.

Because crime data submission to the FBI is voluntary, the report is believed to vastly undercount hate incidents.

To improve its crime data collection, last year the FBI switched to a new system that captures a more detailed snapshot of each incident.

The FBI told VOA that about 63 percent of law enforcement agencies that used to submit data via the old system have switched to the new method.

'Most American police and sheriffs' departments have fewer than 50 sworn officers, and all police agencies in the United States are faced with fewer and fewer applicants because policing is not a sought-after career choice for Gen Z,' Hulsey told VOA.

There are concerns that a lack of reliable data about hate crimes, particularly anti-Muslim and anti-Semitic incidents, will lead to less public awareness as well as reduced interest among policymakers in addressing a worsening problem.

From China, where Uyghur minority Muslims are reportedly incarcerated en masse in so-called indoctrination camps, to some European cities where Islam's holy book, the Quran, has been set on fire, Islamophobia has been reported as a global phenomenon.

In March, a U.N. expert warned that anti-Muslim hatred has risen to epidemic proportions as 'widespread negative representations of Islam, fear of Muslims generally, and security and counterterrorism poli­cies have served to perpetuate, validate and normalize discrimination, hostility and violence towards Muslim individuals and communities.'

Last month, the U.S. recognized what Secretary of State Antony Blinken called a genocide of Muslims in Myanmar. 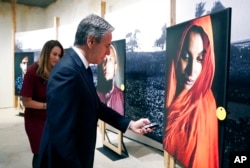 In the world's largest democracy, India, some ruling Hindu politicians have publicly called for a Muslim genocide.

For Khaled Beydoun, much of the Islamophobia happening in the world is a consequence of the U.S. war on terror.

'Governments adopt the very exact vocabulary of anti-terrorism in the very same justifications of blaming Muslims,' he said while accusing the U.S. of adopting a selective policy of condemning Islamophobia where its interests warrant.

A spokesperson for the State Department declined to comment about the impact of the war on terror on Islamophobia in different parts of the world, but directed VOA to remarks made earlier by Rashad Hussain, the U.S. ambassador at large for international religious freedom.

'Monitoring and combating anti-Muslim hatred has always been a part of my office's mandate,' Rashad told a hearing in February. 'In recent years, we've seen how anti-Muslim hatred has often corresponded to other societal trends. These include an influx of migrants from conflict areas, the rise of populism and nationalism, and an increase in xenophobic language in political rhetoric.'

For Haroon Mughal, author of the book Two Billion Caliphs: A Vision of a Muslim Future, Islamophobia should not be the only focus.

'The great danger to focusing too much on Islamophobia is that it hinders us from seeing the ways in which anti-Muslim bias is symptomatic of larger patterns across American society, where many people of all backgrounds feel humiliated, helpless and hurt,' Mughal told VOA.