German airline accused of booting all Jewish passengers off flight 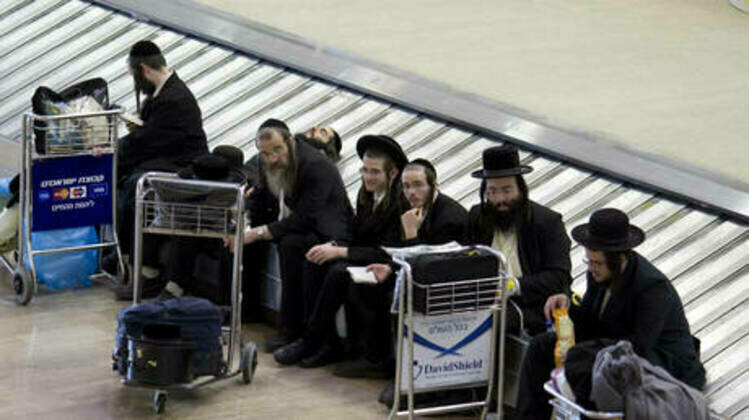 Even those obeying the rules were removed from the plane for merely appearing to be Jewish, passengers claimed

A group of Orthodox Jewish travelers was expelled from a Lufthansa airliner during a stop in Frankfurt after some were accused of flouting its masking requirements. Some passengers insist they complied with the rule and were removed solely for their religious identity, while non-Jewish travelers were allowed to go on their way.

While stopped in Frankfurt during a connecting flight from New York to Budapest last week, a number of Jewish travelers were barred from re-boarding the plane by staff with Lufthansa airlines, who claimed some were not wearing masks during the last flight from NYC's John F. Kennedy International Airport.

In footage purportedly filmed by a passenger during a heated exchange with an airline employee, the staffer is heard saying "everyone has to pay for a couple," referring to those who ran afoul of the masking requirement, and that "It's Jews coming from JFK. Jewish people who were the mess, who made the problems."

Responding, the bewildered passenger demanded to speak to a supervisor, "because this is 2022, this is a western country, and there's a lot of history of antisemitism around the world, and this is gruesome. This is unbelievable." He added "why do Jewish people pay for other people's crimes?"

Many of the travelers were on a yearly pilgrimage to view the grave of a revered rabbi, Yeshayah Steiner, who is buried in a village in northern Hungary, according to the Times of Israel.

Speaking to travel website DansDeals, which first reported the story, passenger David Landau said that a number of the passengers on the flight from New York belonged to larger groups traveling together. Landau, however, noted that he and his wife were not part of any group, as was the case for several other Jewish travelers on the plane.

After issues on the previous flight from JFK over mask compliance, Landau said the stop in Frankfurt lasted longer than expected, as the plane did not begin boarding until 10 minutes after its scheduled departure time. He added that the airline then began paging individual passengers by name, and that only those who "were not visibly Jewish" were allowed to board.

Another passenger identified as Chuny Rosen said he was asked whether he belonged to "the group from NYC" after being paged by staff, and answered that he was alone and had booked his own ticket. However, he told the travel site he was wearing distinctive Jewish religious garb during the interaction, and that by the time he was able to remove the garment and return with his bags, "the gate was closed and he couldn't board the flight."

"If you feel you have to punish individuals who didn't comply, that's fine. But you can't just punish an entire race just because we all look alike," yet another passenger, Usher Schik, told New York Jewish Week, adding that most people on board did not know each other.

The expelled passengers were also allegedly barred from booking another ticket to Hungary for a full 24 hours.

In a statement obtained by DansDeals, Lufthansa confirmed that a "larger group of passengers" was removed from the flight "because the travelers refused to wear the legally mandated mask (medical mask) on board."

"For legal reasons we cannot disclose the number of guests involved in the incident, however Lufthansa has rebooked the guests on the next available flight to their final destination," the company added. "A prerequisite for transportation is that the travelers complied with the mask mandate, which is a legal requirement."