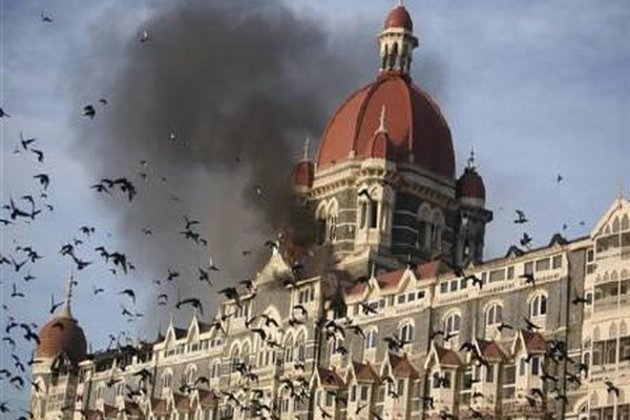 New Delhi [India], November 26 (ANI): Political leaders from across the country on Friday paid homage to the victims and security personnel who lost their lives in the 26/11 Mumbai terror attacks.

Union Home Minister Amit Shah termed the Mumbai 26/11 terror attacks a "cowardly" act while paying tribute to those who had lost their lives.

"Heartfelt tributes to those who lost their lives in the Mumbai 26/11 terror attacks and salute the courage of all the security personnel who bravely faced the terrorists in the cowardly attacks. The whole nation will be proud of your bravery. A grateful nation will always be indebted to your sacrifice," Shah said in a tweet.

Union Minister of Commerce and Industry Piyush Goyal paid tribute to jawans, policemen and citizens who lost their lives in the 26/11 Mumbai terror attack.

"I humbly pay homage to all the jawans, policemen and citizens who laid down their lives in 26/11 Mumbai Terror Attacks to protest the country. Considering the nation as paramount, this country will always be indebted to all the brave soldiers who sacrificed their lives in this attack," he said in a tweet.

Defence Minister Rajnath Singh remembered all those who lost their lives in the attacks.

"On the 13th anniversary of the November 26th terror attack on Mumbai, we remember the innocent lives we lost. My tributes to everyone who lost their lives in those attacks. Our security forces displayed exemplary courage during the 26/11 attacks. I salute their bravery and sacrifice," Singh said in a tweet.

Congress leader Rahul Gandhi paid homage to the fallen soldiers and said, "They protect the country by staying away from the family in difficult weather at the border. Save the lives of the innocent by risking his life in terrorist attacks. They don't care about their life; they only care for their country. It is the pride of the family, of the village, of the country - such as the soldiers of my country.""Salute to the heroes of 26/11 MumbaiTerrorAttack. Jai Hind!" tweeted Rahul Gandhi.

Shiromani Akali Dal (SAD) President, Sukhbir Singh Badal said, "Heartfelt tributes to the courageous martyrs of 26/11 Mumbai Terror Attack. We mourn with families who lost their dear ones. The nation will always remain indebted to the brave police and security forces who fearlessly fought against the terrorists to save the countrymen."Delhi Chief Minister Arvind Kejriwal said in a tweet, "I pay homage to the immortal martyrdom of our brave soldiers who laid down their lives in the 26/11 Mumbai attack and served the nation. This country will always be indebted to its brave martyrs,"Former union minister and Shiromani Akali Dal (SAD) leader Harsimrat Kaur Badal also paid homage to the bravehearts who made supreme sacrifice to protect the nation.

"26/11 MumbaiTerrorAttack - the horrific incident which we will never forget. Our solidarity with families who lost their loved ones in that gruesome attack. Salute to the bravehearts who made supreme sacrifice to protect the nation. The entire country will remain indebted to them," said Harsimrat Kaur Badal.

After sailing to the city under the cover of darkness, the terrorists targeted major landmarks of Mumbai with the first attack taking place at the crowded Chhatrapati Shivaji Terminus (CST) railway station.

Ajmal Amir Kasab and Ismail Khan carried out the attack at this station, killing as many as 58 people and injuring over 100.

Kasab and Khan later entered to attack Cama Hospital, but the same was thwarted with the alertness of the hospital staff. They, however, killed 6 police officials, including the city's Anti-Terrorism Squad Hemant Karkare in an ambush after leaving the hospital.

The second site of the attack was the Nariman House business and residential complex where a Rabbi, his wife, and six others, including five Israeli citizens, were killed by the terrorists who first held them hostage.

The two-year-old child of the Rabbi couple, Moshe, survived the attack. Then 'Baby Moshe' became the face of the innocent victims of ruthless terrorism.

The third site to come under attack on 26/11 was the Leopold Cafe followed by Taj Mahal Hotel and Tower. Four terrorists carried out the attack at the cafe before entering the iconic Taj hotel, where they killed as many as 31 people after laying a three-day siege at the hotel.

The other site to come under attack during the 26/11 was Oberoi-Trident hotel where another group of two terrorists entered at almost the same time, as the other four had entered the Taj. At Oberoi-Trident hotel the siege officially ended on the evening of November 28 with as many as 30 being killed in the horrific attack.

The attack and seizure finally culminated on the morning of November 29, 2008, after the National Security Guards (NSG) secured the Taj Mahal Palace Hotel.

By the time commandos of the National Security Guards (NSG) gunned down the last terrorists who had been holed up in south Mumbai's Taj Mahal Palace hotel, over 160 people were killed and hundreds were left injured.

After the attack, it was established that the 10 terrorists had sailed to Mumbai from Pakistan's port city, Karachi. Their voyage to Mumbai involved hijacking a fishing dingy and killing four of the five men crew, leaving one occupant to ferry them to the Mumbai coast.

In these gruesome attacks, 9 terrorists were killed and the lone survivor, Ajmal Amir Kasab, was caught and was sentenced to death at Yerwada Central Jail in Pune in 2012.

The Jamaat-ud-Dawah (JuD), whose mastermind was Hafiz Saeed, was believed to have plotted the 26/11 attacks. (ANI)