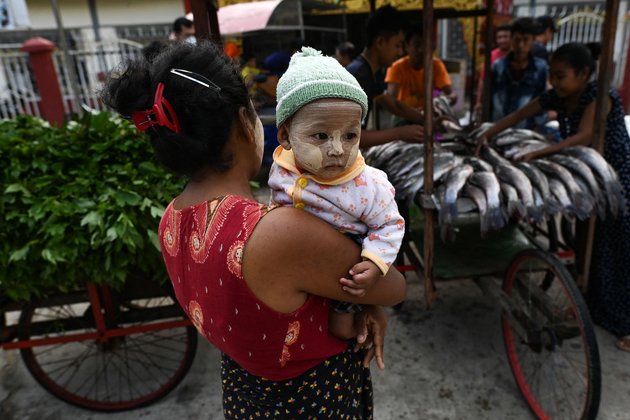 Myanmar citizens are struggling with shortages of food and other necessities after 65 days of rule under the military junta, whose troops shake down cargo trucks at roadblocks and steal goods and cash from vehicles, stores, and homes, residents said Tuesday.

The Feb. 1 coup that overthrew the country's elected government followed a year of deepening economic distress from a shutdown of economic activity to control the spread of the coronavirus. Myanmar is Southeast Asia's poorest country, with nominal per capita gross domestic product of about $1,300.

Measures to fight the pandemic, which flared up this past winter, hit households and businesses, including those in the agricultural sector, which accounts for one-fifth of GDP and over half of employment. The coup and mass civil disobedience against the junta have further dampened economic activity.

Military restrictions on transportation and security barriers set up on major roadways nationwide have choked the country's flow of food and other goods into cities and suburban areas. Soldiers stationed along major roadways often confiscate cargo and cash from drivers and motorcyclists in the Sagaing and Mandalay regions - two of Myanmar's largest population centers - merchants told RFA.

Security forces are stopping all traffic that passes through most towns in the two regions and inspecting vehicles, they said.

"[Our] car was stopped last evening in Kyaukpadaung, Mandalay, and 500,000 kyats [$350] was taken from a handbag on the car's dashboard," said a person who witnessed the theft, but wanted to remain anonymous. "We told them we were civil servants, and they said they didn't care and just took the money."

Similar incidents were reported in Sagaing region in the country's northwest, where police and troops seized food from shops in markets and shopping malls without paying, traders said. They also stole goods from vehicles they inspected, resulting in fewer cargo trucks moving though the region.

"It's not easy to transport goods now because [troops] are everywhere, and we don't know if we can proceed or not," said a trader in Monywa, Sagaing's largest city. "The cars can go on only when they say so. Even then, they sometimes will take stuff."

The trader said he recently saw security forces take a box of snacks from a vehicle during a security check.

"Life is quite difficult," he added.

Only about two of every 100 truck drivers are now moving cargo through the region, the trader said.

Not only do security forces check every part of the trucks, they also ask questions if they find a lot of cash, inquiring where the money came from and who will receive it, and then sometimes take the money for themselves, he said.

The economic pinch is also being felt in Yangon, the most populous city in Myanmar, whose citizens rely on deliveries of goods from outside the urban center for their household and business needs.

Disruptions in the flow of consumer goods means that neighborhood markets have little meat or vegetables to sell, while prices for the products have doubled, said one Yangon homemaker.

"In Yangon, only the big supermarkets like City Mart and Metro are operating as usual, and the smaller shops and stores are all closed," she said.

"Only about half the regular amount of meat and veggies is available, and you have to buy them whether you like it or not as we don't have the opportunity to choose what we want," she said. "Prices have increased twofold, threefold, or more."

The number of cargo trucks entering the commercial center's largest wholesale markets has dropped by two-thirds, while prices of daily necessities have increased, said a rice seller in Yangon.

At the Bayinnaung Market in northwestern Yangon, the largest agricultural commodities trading market in Myanmar, rice deliveries have fallen by about two-thirds, though shops are open as usual, a rice merchant said.

The market for foodstuffs will remain stable for now, but if the flow of basic foods and commodities stops and storage supplies are exhausted, prices will skyrocket, traders said.

The struggle to stay fed and supplied plays out amid life-and-death battles in the streets, as heavily armed security forces suppress demonstrators and ordinary citizens alike, often firing indiscriminately into crowds or dwellings.

At least three civilians had been wounded by gunfire within 24 hours up to midday on Tuesday and an unknown number of people had been arrested since early morning, including four medical doctors in Mandalay.

Soldiers and police detained the doctors as they prepared for a protest on 73rd Street in memory of their fallen colleagues. One man was hit in the arm when police fired live rounds during the crackdown, and officers arrested two pediatricians and two other doctors, and confiscated motorcycles and cell phones from the protesters, witnesses said.

"They arrived in a truck while we were preparing to stage a dawn protest," said one physician at the scene who declined to be named. "They fired stun grenades five times near the university campus. Afterwards, two pediatricians and two other doctors got arrested, and three motorcycles were taken away."

Though local health department workers and other anti-junta protesters have held early morning demonstrations, this was the first time that police took action against them, those at the scene said.

In the Kachin state town of Mogaung, a woman was hit in the arm by gunfire on Monday evening while counting her day's earnings in her shop, witnesses said. She was shot by troops and police stationed on the bridge across the Nangyin River near her neighborhood.

Security forces also shot another man on a motorbike when he tried to turn around at the bridge, witnesses said.

"There were five or six shots, and one of the first shots hit the woman," said a local resident. "The last shot hit the guy on the motorbike, slightly wounding him."

A family member of the woman who was shot said a military officer apologized for the shooting Tuesday morning and offered to take her to a military hospital in Kachin's capital Myitkyina.

Local residents said they wanted the troops to leave the bridge.

Security forces continued their searches for protest leaders in other parts of Myanmar, sometimes resorting to their arresting their relatives.

When police in Thayarwaddy, a city in the central Bago region, couldn't find Jar Lay, an anti-coup protest leader, they arrested his family of six, including a 4-year-old daughter, a toddler niece, and a 13-year-old brother-in-law.

The six were released on Tuesday, but Jar Lay told RFA from his hiding place that police beat his teenage brother-in-law on the side of his head during an interrogation.

"An informer told police we had explosives and weapons hidden in the house which was not true, and troops came to search for them at about 3 a.m.," he said. "My entire family, including my kids and my in-laws, was taken to a military camp."

The teenager, who was hit in the temples and on his ears, was questioned about why he shared posts and photos on social media from his cellphone, Jar Lay said.

"He was later taken to a police station and was forced to sign a confession," he said.

Before their release, the relatives had to sign a pledge that they would help police capture Jar Lay, and that if he could not be found, they would be rearrested, Jar Lay said.

Security forces are even rounding up domestic celebrities who may not have played a part in the protests.

Zaganar is not on the list of those subject to police warrants, so it is not yet known what he has been charged with or where he is being detained, they said.

Throughout the country, protests against the junta continued in various forms in Mandalay, the Yangon suburbs, and in other cities and towns.

Anti-junta protesters added color to their rallies Tuesday by smearing red paint on streets and pavements in the commercial hub Yangon to signal their opposition to the military regime's bloody crackdowns on demonstrations that have left about 570 people dead and injured scores of others, Agence France-Presse reported.

Myanmar youth meanwhile are calling for boycott of the annual Thingyan Water Festival holiday next week in defiance of the military regime and to honor those killed by security forces, the online news journal The Irrawaddy reported. Last year's holiday celebrations, which include splashing water on people in public places, were called off by the government due to the coronavirus pandemic.

Military authorities, who already have closed the offices of deposed leader Aung San Su Kyi's National League for Democracy, are continuing to pursue and arrest party officials and parliamentarians, according to residents in various areas.

Security forces arrested Aye Khine, a member of parliament and a local NLD executive committee member, in Mandalay region on Tuesday, said one of his colleagues.

"He was returning home from hiding for a while and was arrested while he was making a phone call in the city. His phone was also taken away," said the NLD member who spoke to RFA on condition of anonymity.

Ye Kyaw Thwin, an NLD lawmaker representing Mawlamyine township in Ayeyarwady region, was arrested by authorities Tuesday afternoon while fleeing a village following a complaint from a military informant, one of his colleagues said.