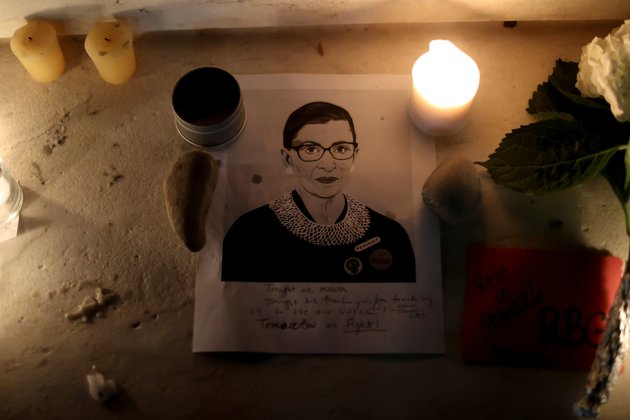 Longtime Supreme Court Justice Ruth Bader Ginsburg, only the second woman to serve on the court, died Friday from complications with cancer.

Ginsburg, a stalwart liberal and champion of women's rights, died at her home in Washington surrounded by her family, according to a statement from the court. She was 87.

"Our nation has lost a justice of historic stature," Chief Justice John Roberts said in the statement.

Ginsburg had served on the court since 1993. She died of complications from metastatic pancreatic cancer, the court said in its statement.

Ginsburg announced in July that she was undergoing chemotherapy treatment on her liver, the latest of several health issues including multiple battles with cancer.

Ginsburg's death gives President Donald Trump the possibility to expand the conservative majority on the Supreme Court with a third appointment just under seven weeks before a presidential election.

Her death is likely to spark a political battle over whether Trump should nominate a replacement justice with a confirmation hearing in the Republican-led Senate or leave the seat vacant until after the results of the presidential election are known. The court currently has a 5-4 conservative majority. Supreme Court justices are appointed for life.

National Public Radio reports that just days before her death, Ginsburg dictated a statement to her granddaughter Clara Spera: "My most fervent wish is that I will not be replaced until a new president is installed."

Senate Republican leader Mitch McConnell said in a statement Friday that any nominee by Trump "will receive a vote on the floor of the United States Senate."

In a statement Trump said, "Justice Ginsburg demonstrated that one can disagree without being disagreeable toward one's colleagues or different points of view. Her opinions, including well-known decisions regarding the legal equality of women and the disabled, have inspired all Americans, and generations of great legal minds."

Democratic presidential candidate Joe Biden said of Ginsburg, "she was consistently and reliably the voice that pierced to the heart of every issue, protected the constitutional rights of every American, and never failed in the fierce and unflinching defense of liberty and freedom.''

Democratic leader of the House of Representatives Nancy Pelosi said in a statement, "We must honor Justice Ginsburg's trailblazing career and safeguard her powerful legacy by ensuring that the next Associate Justice of the Supreme Court upholds her commitment to equality, opportunity and justice for all."

Ginsburg resisted calls from some liberals to retire during Barack Obama's presidency, at a time when Democrats controlled both the White House and Senate.

Late in Obama's presidency, Republicans who were then in control of the Senate refused to hold a confirmation hearing to consider his nominee to fill the vacancy left by the death of conservative Justice Antonin Scalia. The move infuriated Democrats, and the seat remained vacant until after Trump's presidential victory.

Ginsburg entered the legal profession at a time when there were few women lawyers and spent her career working to expand women's equality.

She was born on March 15, 1933, in Brooklyn, New York, and knew she wanted to be a lawyer by her third year in college.

After graduating from Cornell University in 1954, she was accepted to Harvard Law School, just five years after they started admitting women. She transferred to Columbia Law School where she received her degree in 1959, after her husband, Martin Ginsburg - who became a renowned tax attorney and law professor - took a job in New York City.

Ginsburg has said it was challenging finding a job in a male-dominated profession.

"There wasn't a single firm in the entire city of New York that was willing to take a chance on me," she said.

However, with the help of a professor, she got a clerkship and soon afterward started teaching at Rutgers University School of Law and Columbia Law School.

In 1972, Ginsburg founded the Women's Rights Project, an initiative of the American Civil Liberties Union, to work for equality for women and girls in all spheres of life.

In that role, she argued six cases before the court, winning five of them.

She was appointed to the Supreme Court in 1993 by President Bill Clinton, becoming the second woman ever named to the court, after Justice Sandra Day O'Connor was appointed 12 years earlier.

During her time on the court, Ginsburg was an articulate voice for the liberal wing of the bench.

She said she always tried to do what she believed was right.

"I hope that I will be remembered as someone who loves the law, loves her country, loves humanity, prizes the dignity of every individual, and works as hard as she can with whatever talent she has, to make the world a little better than it was when I entered it."

Ginsburg had a turbulent relationship with Trump. She criticized him during the 2016 presidential campaign in a series of media interviews, leading him to call for her resignation.

Ginsburg's husband, Martin, died in 2010. She is survived by two children, Jane and James, and several grandchildren.