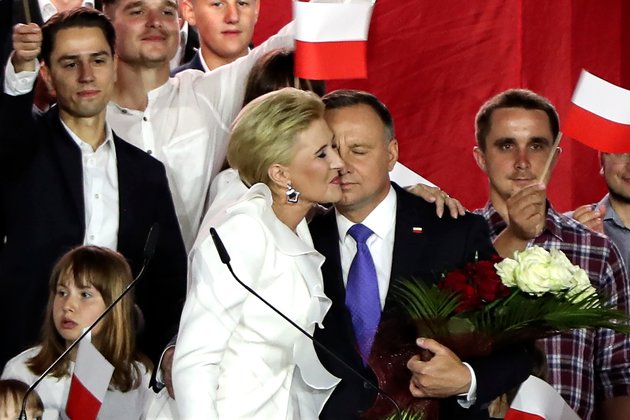 Incumbent Polish President Andrej Duda has won the presidential election. With 99 percent of the ballots counted from Sunday's runoff election, Duda won 51.2 percent of the vote. The narrow victory was announced early Monday.

The right-wing Duda and liberal Warsaw Mayor Rafal Trzaskowski both had about 50 percent of the votes late Sunday night with one exit poll by a state-run Polish TV station giving Duda a very slight lead.

The president claimed victory Sunday night. "Thank you to all my fellow Poles who voted for me and cast their votes. I want to thank you with all my heart," he told a rally in Pultusk.

Duda's Law and Justice Party wants to extend its majority in parliament and implement conservative social, judicial and immigration policies that many in the European Union have criticized as anti-democratic.

Those policies include Duda's pledge to ban gay rights classes in schools. He has called homosexuality worse than communism.

Trzaskowski, of the Civic Platform party, campaigned on promises to preserve the ruling party's popular welfare programs but said he would block any legislation he says would be unconstitutional. He also wanted to restore good relations with the European Union.

The coronavirus outbreak forced a nearly two-month delay in the first round of voting.

Observers say the postponement hurt Duda, who had looked as if he would cruise to a first-round victory. But his popularity in the polls slipped after the Civic Platform party replaced a much less popular candidate with Trzaskowski and other candidates were allowed to get out and campaign more when COVID-19 restrictions were eased.