MacMath, RSL shut out Colorado in MLS is Back opener 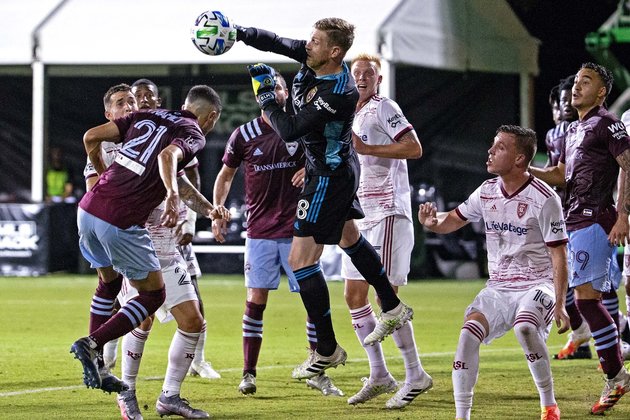 Midfielders Albert Rusnak and Damir Kreilach scored goals on Sunday night as Real Salt Lake recorded a 2-0 victory over the Colorado Rapids in both club's first contest in the MLS is Back Tournament near Orlando, Fla.

Real Salt Lake goalkeeper Zac MacMath made four saves in the Group D match at the ESPN Wide World of Sports Complex. The shutout was the second of the season for MacMath, who spent the 2015-18 seasons with Colorado.

Goalkeeper Clint Irwin made four saves for the Rapids.

Rusnak's score in the 27th minute was set up by a cross from forward Douglas Martinez.

Irwin got his hand on Martinez's right-side boot but the ball caromed over to Rusnak, who sent a straight-away left-footer toward the net. The ball went off Irwin's hand and defenseman Drew Moor's leg en route to giving RSL a 1-0 lead.

The Rapids didn't get off their first shot until the 31st minute when midfielder Kellyn Acosta's header was both high and wide to the left. Colorado finished with three first-half shots, while RSL had five.

Rusnak had a golden opportunity for a second goal when RSL was awarded a penalty kick after Irwin took down Martinez in the penalty area.

Rusnak lined up the kick in the 72nd minute and sent it to Irwin's left but the Rapids' goalie easily slapped the ball away with his left hand. Midfielder Nick Besler jumped on the rebound and his close-range blast was kicked away by Irwin.

Just four minutes later, RSL increased its edge to two when Kreilach received the ball outside the box and sent a right-footed shot into the left corner. Midfielder Corey Baird was credited with the assist.