8 things every foreigner will experience (and appreciate) in Russia 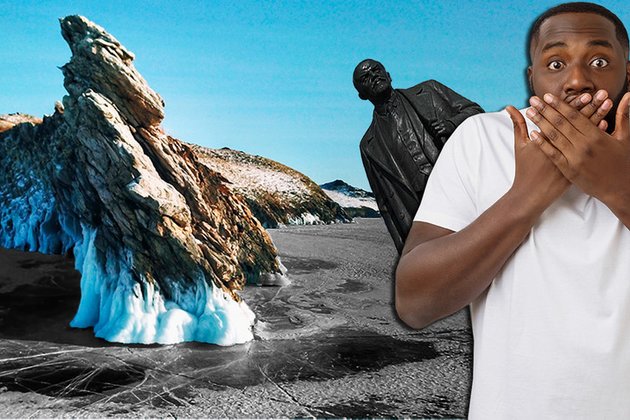 From Russian-style Karaoke joints to odd architectural remnants of a Soviet past, all the way to peculiar local food and a tradition for lengthy toasts - here's a list of things you can expect to be pleasantly surprised by when visiting Russia for the first time.

During your travels in Russia, you might find a statue of Lenin, an Ulitsa Lenina (Lenin Street) or Ploschad Lenina (Lenin Square) in every city you visit. In Moscow alone, there are approximately 82 monuments commemorating the former Soviet leader; and in cities from Astrakhan to Barnaul to Belgorod, you'll be sure to run into an effigy of Lenin looking deep in thought. For a truly Instagram-worthy shot with the revolutionary leader, head to Ulan Ude, the capital of Russia's Buryatia Republic in Siberia. Here you'll find the world's largest bust of a Lenin head - standing at 25 feet tall and weighing 40 tons.

World War Two in Russia is known as the Great Patriotic War - a war in which 26 million Soviet lives were lost, 11 million of those being soldiers. To acknowledge the sacrifices made by the USSR to defeat the Axis powers, there is a litany of war memorials across the country. One of the most memorable monuments is the 'The Motherland Calls' in Volgograd - akin to the US Statue of Liberty! For history and war buffs, don't miss St. Petersburg's monument 'To the Heroic Defenders of Leningrad,' and Moscow's World War Two and Holocaust Memorial at Poklonnaya Hill.

Many foreigners become enchanted with Russia because a visit can seem like a journey back in time. Chances are that you'll stumble upon remnants of a past time that still exist in today's contemporary Russia. For instance, Russian 'izbas' -- traditional wooden homes -- are scattered all over the country. The city of Irkutsk is known as the 'Paris of Siberia,' is dotted with izbas -- some detailed with lattice-work windows or repainted in candy colors, while others have fallen into disrepair over time. Small villages and towns, many unindicated on official maps, are also prevalent in Russia -- and may have you feeling like you're in a different era. Instagram accounts and bloggers dedicated to the charms of the Russian countryside and village life have now sprung up, including @village_ru and @polyaizderevki.

When you tire of Soviet architecture or imperial grandeur (if ever), Russia's geographic span makes the country an ideal spot to take a break in nature. Generally, Russia is seen as separated into the west and east, with the Ural Mountains as the dividing line -- the Urals itself is home to nature reserves, national parks and scenic spots for hiking and camping. In Russia's south, Sochi (where the 2014 Olympics were held) is a picturesque mountain village; while the southwest on the border with Georgia is home to Mount Elbrus, a snow-capped volcano in the Caucasus Mountains popular with climbers. In the far east, between the Sea of Okhotsk and the Bering Strait and just north of Japan, is the incredible Kamchatka Peninsula -- with otherworldly landscapes of volcanoes and geysers.

The majority of Russia's population subscribe to Orthdodox Christianity -- meaning an abundance (tens of thousands) of gold, onion-domed Orthodox cathedrals in the country. Moscow's St. Basil's Cathedral in Red Square and St. Petersburg's Church of the Savior of Spilled Blood are among the most recognizable; but don't miss out on smaller cities, like Vladimir's Holy Assumption Cathedral and Nizhny Novgorod's Church of Nativity of Most Holy Mother of God. Russia however, is resident to 5,000 religious associations, pertaining not only to Christianity, but also Islam, Judaism, Buddhism and more. A few stunning sites to check out are Kazan's Kul Sharif mosque, Vladikavkaz's Mukhtarov mosque and Kalmykia's Golden Abode of the Buddha Shakyamuni. Russia is also home to the world's only Jewish Autonomous Region (apart from Israel) -- located in the far east, a 2-hour train ride from Khabarovsk Krai.

To truly understand Russia, taking time to get to know the locals is necessary. Russians are very hospitable to foreigners and will welcome you warmly as their guests. Just take note that toasting 'cheers' to your friends and guests is not enough -- Russians are famous for their heartfelt, honest (and sometimes lengthy) toasts! These toasts often don't even have to accompany any alcohol beverage -- if you're lucky, you may hear a Russian toast -- to friendship, to a great trip or enjoyable times spent together.

From belting out classic rock tunes in an American bar to singing earnest love songs in a Chinese TV karaoke room, each country seems to have its own style of karaoke -- and Russia is no different. THe uniqueness of Russian karaoke is that it can take place anytime you hang out with a group of Russians -- many times, this would be in a friend's apartment kitchen and one member of the group is bound to play acoustic guitar. Though English tunes from artists like John Mayer and the Red Hot Chili Peppers are always popular, if you stay in Russia long enough, you'll learn the quintessential Russian tunes -- from Kino/Viktor Tsoi, to Mummiy Troll, Tantsy Minus and more.

The Russian answer to crepes, dumplings and 'meat on a stick'

Russian cuisine may not be well-known worldwide, but the food you can sample in Russia is diverse and reflects the varied cultures of the federation. Originating from the Caucasus/Central Asia, 'shashlik' is Russia's answer to barbeque -- grilled meat on a large stick, often roasted over a long and open bbq pit. Russian variations of dumplings include traditional pelmeni (with chicken, beef or pork filling), topped with 'smetana' (sour cream) and dill. Buryat buuzy are palm-sized dumplings filled with an onion and meat mixture -- it must be eaten with your hands, and has a hole at the top to drink the soup inside. For crepes, there is no need to go to France as Russia offers 'blini' both savoury and sweet -- classic accompaniments include sour cream, caviar and dill; or Russian berry jam and you guessed it, sour cream.