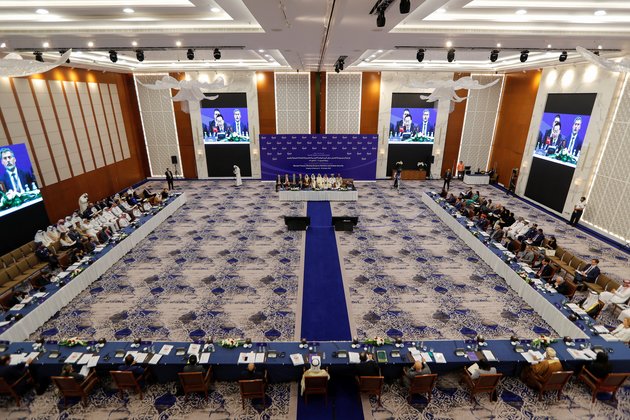 MANAMA, BAHRAIN - A senior Israeli official attended a maritime security conference in Bahrain on Monday in another sign of Gulf Arab nations and Israel transcending longtime enmities to focus on a perceived common threat from Iran.

The maritime workshop being held in Manama stems from a Middle East conference held in Warsaw in February that Israeli Prime Minister Benjamin Netanyahu at the time called a "historical turning point" for an alliance against Tehran.

The United States is trying to build a global maritime coalition to secure vital trade channels following attacks on tankers in Gulf waters in May and June that Washington has blamed on Iran, a charge Tehran denies.

Tensions have risen since President Donald Trump last year withdrew the United States from a 2015 deal between world powers and Iran under which it agreed to curbs on its disputed nuclear program in return for the lifting of sanctions.

Washington has since reimposed a panoply of sanctions meant to strangle Iran's vital oil exports, and Tehran in turn has scaled back on commitments under the deal to restrict its uranium enrichment program.

"Aviation and maritime security are at top of the policy agenda in the region," Bahraini Foreign Minister Sheikh Khalid bin Ahmed al-Khalifa told the opening of the Maritime and Aviation Security Working Group.

Israeli Foreign Ministry official Dana Benvenisti, head of its counter-terrorism department, attended the Manama gathering in a rare visit by an Israeli official to Bahrain.

In April a group of Israeli businessmen and government officials canceled a planned visit to an economic conference in Manama due to what organizers said were "security concerns", following a social media campaign by Bahraini opponents of the visit.

In June, Bahrain hosted a "Peace to Prosperity" workshop meant to encourage investment in the Palestinian Territories as the first part of a broader White House political plan to end the long-running Israeli-Palestinian conflict.

Jail time for man who ripped off thousands of U.S. troops and veterans

SAN ANTONIO, Texas - A man who hacked into the U.S. military's databases and stole personal information relating to thousands ...

Humanitarian aid to continue after UNSC pact on access points

NEW YORK, New York - Sanity prevailed on Saturday as last minute efforts to stitch up a renewal of the ...

MIAMI, Florida - U.S. President Donald Trump went to Florida on Friday for a briefing on what he said has ...

GENEVA, Switzerland - Lebanon, faced with an economy in upheaval, mass protests, and the crippling effects of the coronavirus is ...

The British Armed Forces led their nation in saying farewell to the Forces' Sweetheart with a series of ceremonial tributes ...

SEOUL, South Korea - North Korea says the chances are low for another summit with the United States, after President ...

SYDNEY, Australia - Stocks advanced on Monday in a positive start to the week.The big action was in Tokyo where ...

UK to spend hundreds of millions of pounds on border infrastructure

Peace and Order programs get P9.3M budget in Tacurong City

TACURONG CITY, Sultan Kudarat, July 13 (PIA) - Making sure that peace and order programs do not take a back ...

Tech stocks were going strong even before Covid-19, but behavioral shifts during the pandemic have lifted the sector further into ...