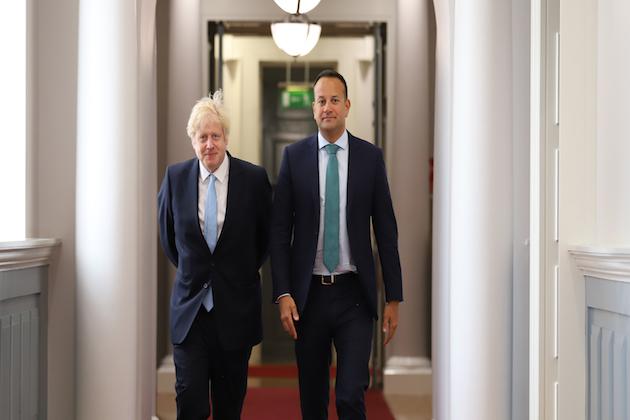 DUBLIN, Ireland - Taoiseach Leo Varadkar and UK Prime Minister Boris Johnson wrapped up their meeting in Dublin on Monday saying they had positive and constructive discussion.

The pair spoke privately over breakfast for more than half an hour before joining their delegations for another half hour meeting.

Common ground was established in some areas although significant gaps remain.

Ireland and the UK are committed to securing an agreement between the European Union and the UK, and recognise that negotiations take place through the Brussels Task Force, statement from the taoiseach's office said.

They also shared their commitment to the Good Friday Agreement and the restoration of the power-sharing institutions in Northern Ireland.

Prior to the meeting Varadkar outlined Ireland's position on Brexit to Mr Johnson and members of the media.

"We meet this morning at a point where the stated intention of the British Government is to leave the EU on 31 October, with or without a deal," he said.

"However, the story of Brexit will not end if the United Kingdom leaves on 31st October or even January 31st - there is no such thing as a clean break. No such thing as just getting it done. Rather, we just enter a new phase."

"If there is No Deal I believe that's possible, it will cause severe disruption for British and Irish people alike. We will have to get back to the negotiating table. When we do, the first and only items on the agenda will be citizens rights, the financial settlement and the Irish border. All the issues we had resolved in the Withdrawal Agreement we made with your predecessor. An Agreement made in good faith by 28 governments," the Irish leader said.

"If there is a Deal, and I think that is possible, we will enter talks on a Future Relationship Agreement between the EU and UK. It's going to be tough dealing with issues ranging from tariffs, to fishing rights, product standards and state aid. It will then have to be ratified by 31 parliaments."

"Prime Minister, negotiating FTAs with the EU and U.S. and securing their ratification in less than three years is going to be a Herculean task for you. We want to be your friend and ally, your Athena, in doing so," Varadkar said.

"The manner in which you leave the EU will determine if that's possible."

"I am ready to listen to constructive ways to achieve our agreed goals and resolve the current impasse," he said.

"But what we cannot do, and will not do, is replace a legal guarantee with a promise."

"And the people of this island, North and South, need to know that their livelihoods, their security and their sense of identity will not be put at risk as a consequence of a hard Brexit."

"Avoiding the return of a hard border on this island and protecting our place in the single market are the Irish Government's priorities in all circumstances," Varadkar said.

"We must protect peace on the island and the burgeoning success of the all-island economy. This is why the backstop continues to be a critical component of the Withdrawal Agreement, unless and until an alternative is found."

"Yes, we are open to alternatives. But they must be realistic ones, legally binding and workable," explained the taoiseach.

"We have received no such proposals to date."

"Prime Minister we have spoken twice by phone already. I know we have a shared desire to see the Northern Ireland institutions restored. The Tnaiste and Secretary of State are already working closely together on that. The Good Friday Agreement is proof that old foes can come together to deal with the most intractable of problems. As co-guarantors of the Agreement, I look forward to exploring with you, how working with the Northern Ireland parties, we can restore power-sharing and devolution," said Varadkar.

KABUL, Afghanistan - Major violence has spread, and escalated across Afghanistan.Scores of national security forces and Taliban militants have been ...

JERUSALEM - Israeli authorities should provide Covid-19 vaccines to the more than 4.5 million Palestinians in the occupied West Bank ...

WASHINGTON, DC - Washington is locked down and U.S. law enforcement officials are geared up for pro-Trump marches in all ...

WASHINGTON, DC - In a sign of the changing political environment in the Middle East, the United States military will ...

A Chinese government survey ship was intercepted "running dark" without broadcasting its position via AIS (Automated Identification System) by Indonesian ...

SYDNEY, NSW, Australia - Stocks in Asia were hot on Tuesday, although mainland China was running against the trend.Hong Kong ...

NEW YORK, New York - According to futures trading, U.S. stocks are likely to sink further when they re-open on ...

WASHINGTON, DC - Tech giant, Apple might finally be getting rid of Touch Bar from its next rendition of the ...

SYDNEY, NSW, Australia - Stocks in mainland China and Hong Kong advanced on Monday on news that the world's second-largest ...

Owner of pharmacy conglomerate gets 18 years for defrauding TRICARE

A U.S. businessman, a giant in the pharmaceutical industry, is to be jailed for eighteen years and will have to ...