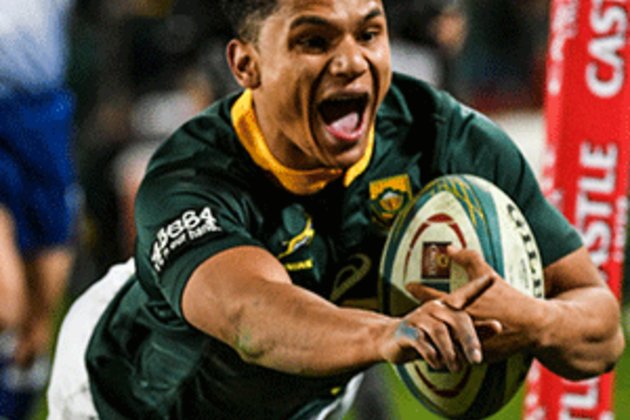 Jantjies had a huge impact on the game at Ellis Park with the highlight being a brilliant 62nd-minute try as he stole away down the blindside that gave the home team a decisive 28-10 lead.

"Herschel showed that he is definitely comfortable at this level and one can have nothing other than praise for him," said Erasmus of the Stormers halfback, who has just one season of Super Rugby behind him.

"To come straight from Super Rugby and play like that - his service, his box-kicks, his technique, his grit on defence and of course his marvellous attacking ability - were awesome.

"It was a great start to his Springbok career," added Erasmus of the official man of the match.

The Springboks ran in five tries to two as they pulled away in the second half, turning a tight 14-10 half-time lead into something approaching a rout for a perfect boost ahead of meeting the world champion All Blacks next weekend.

But while Erasmus was delighted with the result, and some of the individual showings, as he fielded an experimental XV as part of his World Cup planning, he said there would be more to come from his team.

"The performance itself wasn't close to world-class, it was more about individuals who put their hands up and showed that they can prosper at international level," he said.

"But we expected that because the team hasn't played for a while. Rust was obviously one of our worries and whether the combinations would gel, but it came on through the game, even though it was stop-start.

"It was a bit frustrating but individuals showed some great form. But next week in New Zealand we'll be fresh, the bulk of the team have flown over already and are used to the time zone and acclimatised.

"Plus some guys tonight have really put their hands up. Our last three games against the All Blacks have all been decided by a couple of points, so we are expecting a massive game."

Erasmus did not mind admitting that Australia had surprised South Africa with their kicking tactics, even in the absence of the banished Israel Folau, widely considered the best fullback in the world when it comes to taking the aerial ball.

"Australia still had our number in the air, scrumhalf Nic White had some great kicks and their wings were excellent in the air.

"That caught us off-guard, I totally expected a long-kicking game. But we spent 60% of the match in our own half because of those box-kicks. I got that wrong," added Erasmus.