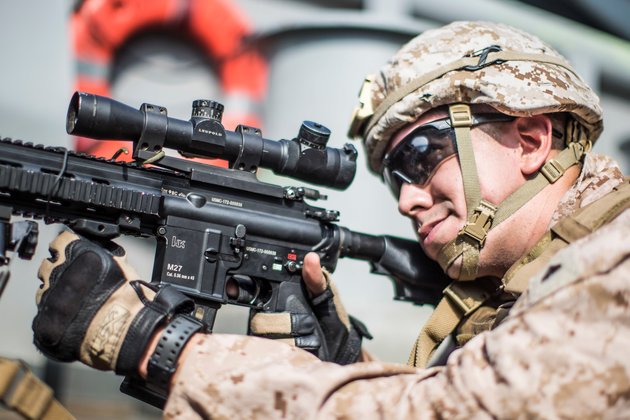 WHITE HOUSE - A U.S. official says "we have very clear evidence" the USS Boxer shot down an Iranian drone that threatened the U.S. Navy warship in the Strait of Hormuz.

"We would anticipate there's video" that will be released by the Defense Department, a senior administration official said early Friday.

President Donald Trump said Thursday the warship destroyed an Iranian drone that was threatening the ship and its crew.

Iran is denying the allegations.

"We have not lost any drone in the Strait of Hormuz nor anywhere else," Iran's Deputy Foreign Minister Abbas Araghchi posted on Twitter, adding he is "worried" the U.S. amphibious assault ship had shot down an American military drone "by mistake."

"The Iranians don't have a great history with the truth," responded a senior U.S. official to the assertion from Tehran. "They have a 40-year history of provoking us."

Trump told reporters gathered for a White House event Thursday that the drone came within 900 meters of the USS Boxer and ignored "multiple calls to stand down."

"The drone was immediately destroyed," he said. "This is the latest of many provocative and hostile actions by Iran against vessels operating in international waters. The United States reserves the right to defend our personnel, our facilities, and interests."

The amphibious ship USS Boxer "was in international waters conducting a planned inbound transit of the Strait of Hormuz. A fixed wing unmanned aerial system (UAS) approached Boxer and closed within a threatening range. The ship took defensive action against the UAS to ensure the safety of the ship and its crew," according to a U.S. Defense Department statement.

"The president has repeatedly said he is willing to have a conversation with Iranian leaders. If Iran wants to make a serious gesture, it should start by ending uranium enrichment immediately and having an actual decision maker attempt to negotiate a deal that includes a permanent end to Iran's malign nuclear ambitions, including its development of nuclear-capable missiles," a senior U.S. official told VOA.

On Friday, another official elaborated that the Trump administration wants "to see those offers coming from someone who has decision-making power, which he does not."

"We've seen absolutely no evidence he has decision-making power," said the senior administration official, adding that any offers from Tehran need to come from either Supreme Leader Ali Khameini or Iranian President Hassan Rouhani.

In a briefing for reporters, a senior official emphasized that Trump desires to change Iran's behavior through diplomacy and economic pressure and "he has no interest in an additional war in the Middle East" but "if they continue to take provocative acts that threaten our assets, our ships, commerce in the region, we'll respond."

The United States on Friday also declared it is beginning to take increased action against Hezbollah, which one senior official characterizes as "a global terrorist organization sponsored and paid for by Iran."

Asked by VOA whether Tehran dictates where and when Hezbollah will strike or if it is acting independently, the senior official replied: "Both. It depends."

The Treasury Department is offering a $7 million reward for credible and actionable information leading to the apprehension of a senior Hezbollah operative, Salman Raouf Salman, for "perpetrating and plotting terrorist attacks in the Western Hemisphere."

U.S. officials say Salman coordinated the 1994 attack on the largest Jewish community center in South America. The bombing of the building in Buenos Aires, Argentina, killed 85 people and injured hundreds of others.

"We believe he is somewhere in the Middle East," a senior U.S. official replied when asked by VOA what information the government has on Salman's current location.

U.S. officials say Salman was the handler for Mohammed Hamdar, arrested in Peru in 2014 for planning a terrorist operation in that South American country.

WASHINGTON D.C.: Overseas Americans are urging U.S. officials to make Covid vaccinations available to them at U.S. embassies. As the ...