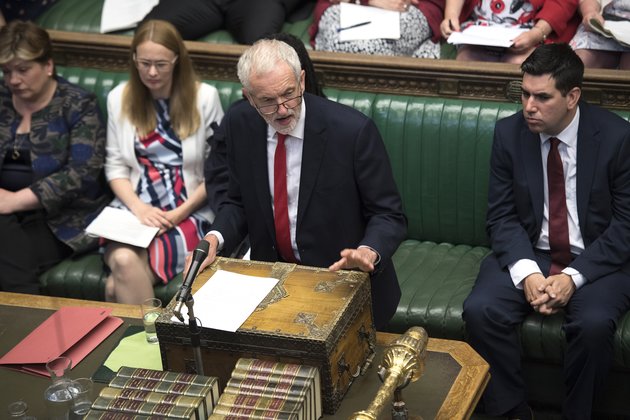 LONDON - Britain's main opposition Labour Party was in turmoil Thursday after a television documentary renewed allegations that anti-Semitism is rife within its ranks.

Accusations of hostility toward Jews have riven Labour since left-winger Jeremy Corbyn, a longtime supporter of the Palestinians, became party leader in 2015.

Corbyn's opponents say criticism of Israel by some Labour members - especially those who joined after Corbyn took the helm - has strayed over the line into anti-Semitism and claim the party has not taken the issue seriously.

The party condemned the BBC documentary, broadcast Wednesday night, saying it contained "deliberate and malicious representations." It alleged the former staffers who took part had "personal and political axes to grind."

"We completely reject any claim that the Labour Party is anti-Semitic," the party said in a statement. "The Labour Party at all levels is implacably opposed to antisemitism and is determined to root out this social cancer from our movement and society."

But many Labour lawmakers expressed dismay at the allegations.

Legislator Pat McFadden tweeted that the program was "powerful and shocking. Huge bravery shown by the young people who spoke out."

Colleague Jess Phillips said on Twitter that the claims made in the program were "worse than I expected. The Labour party response tells me that they don't care."

Labour deputy leader Tom Watson said anti-Semitism was "a sickness in our party" that had to be dealt with.

Watson told the BBC there was a feeling "that there's almost a permissive culture that people can use anti-Jewish, racist language both in our meetings and to each other on social media. And we've failed to address that properly."