Munzir: Occupied Golan is part and parcel of Syria 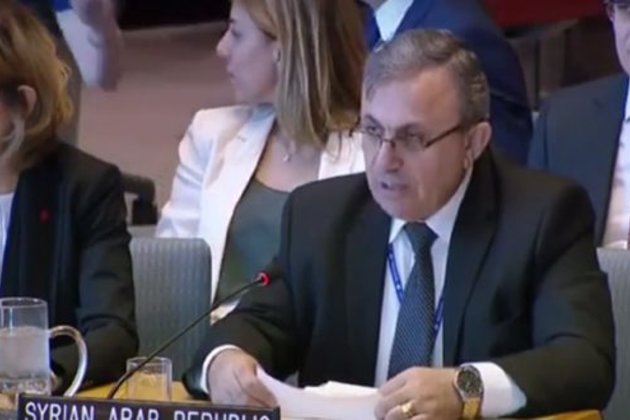 New York, SANA-Acting Charge de' Affairs of Syrian Arab Republic's permanent delegation to the UN, Munzir Munzir, said that Syria reiterates its condemnation of the US illegitimate proclamation on the occupied Syrian Golan in violation of the international law and UN charter.

"The US proclamation on Golan has revealed the reality and dimension of the criminal scheme which aims to consolidate the occupation, spread chaos and divide our region," Munzir added at a UN Security Council session on Monday.

He affirmed that the UN Security council resolution No. 497 stipulates the Syrian Golan as an occupied land, and it considers that any procedures taken by Israel are null, void and has no legal effect.

"The Israeli occupation authorities continue perpetrating war crimes and crimes against humanity and terrorism against citizens of Golan through racial discrimination, arbitrary detention and grasping the lands of others," Munzir said.

He went on to say that when Washington prevents the UN from assuming its responsibilities in maintaining the international peace and security, it encourages the Israeli occupation authorities to go ahead in their aggressive practices and their breaches of the international legitimacy resolutions.

Munzir added that Syria affirms the occupied Golan is part and parcel of its territory and it is a non-negotiable right and won't be prescribed.

"Syria's stance is firm in support of the Palestinian people's right of self-determination and establishing their independent state with Jerusalem as its capital," Munzir concluded.

WASHINGTON, DC - High profile lawyers Alan Dershowitz and Ken Starr have been brought in to work with the legal ...

BERLIN, Germany - Warring factions engaged in the Libyan conflict and UN-Secretary General Antonio Guterres will take part in a ...

Jailed U.S. citizen who demonstrated against Egyptian coup is dead

CAIRO, Egypt - The death this week of Mustafa Kassem, an Egyptian-American imprisoned in Egypt after an unfair trial, underscores ...

BALTIMORE, Maryland - After just a few hours of playing baccarat at a Maryland casino in September 2017, Chenguang Ni ...

WELLINGTON, New Zealand - The New Zealand government's books are in good shape with the accounts in surplus and expenses ...

SYDNEY, Australia - Stock markets in Asia finished in the black on Friday, despite the release of economic data in ...

WELLINGTON, New Zealand - The New Zealand government's books are in good shape with the accounts in surplus and expenses ...

MANILA, Philippines - The Asian Development Bank (ADB) returned to the U.S. dollar bond market on Wednesday with the pricing ...

WASHINGTON, DC - The Securities and Exchange Commission has frozen the assets of an Illinois man and his company after ...