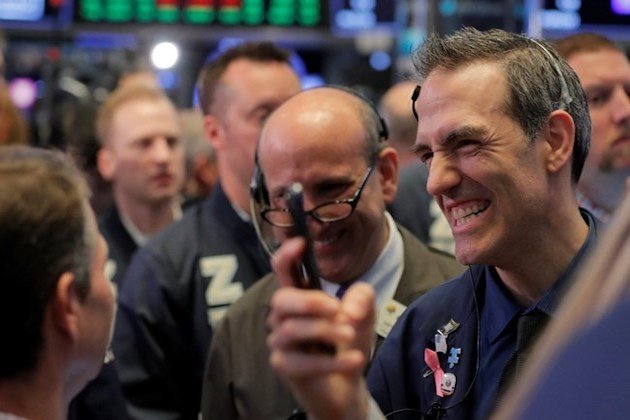 A report published by The Financial Times said proposed new U.S. tariffs on Chinese imports would be delayed pending further negotiations. The report saw buyers wade into the market to buy up stocks that have been heavily discounted in recent days.

The Financial Times said U.S. Trade Representative Lighthizer had told a group of industry executives the next round of tariffs on Chinese imports would be put on hold.

"We'd be trading sideways for quite a while,but we've rallied on that headline," Michael O'Rourke, chief market strategist at JonesTrading in Greenwich, Connecticut told the Reuters Thomson news agency. "If we're stopping imposing tariffs and are talking, it's a positive."

On foreign exchange markets the British pound tumbled as several ministers quit Prime Minister Theresa May's cabinet, including the Brexit secretary. The pound fell from a high of 1.3031 to a low of 1.2723. The unit recovered some ground after May held a press conference, to vow to fight on and to see the Brexit deal through.

Around the close in New York on Thursday, the euro was quoted at 1.1336. The EU currency fell sharply when news of the disarray in the British government broke, but quickly recovered.

The British pound was fetching .1.2782 and appeared to be consolidating at this level at the New York close Thursday.

The Australian dollar remained well bid throughout the pound drama, at the end being quoted at 0.7278.

The New Zealand dollar was the best performer of the day, adding to recent strength to climb to 0.6831.

On overseas markets, it was a mixed bag.

In London, the FTSE 100 shrugged off the political woes of the government and finished in positive territory, albeit by just 4.22 points, a percentage gain of 0.06%. The index closed at 7,038.01.

WASHINGTON, DC - More than 9,100 Americans have now died from the deadly Covid-19 coronavirus, according to the latest data ...

Videos circulating on social media show Ultra-Orthodox Jews in the Israeli town of Bnei Brak coughing on police and calling ...

Conduct of Pell investigation should be reviewed

The allegations of sexual abuse against Cardinal Pell were investigated by the Victorian Police, in particular by Taskforce SANO. This ...

Hot off of singlehandedly ending the Israeli-Palestinian conflict, America's Son-In-Law-In-Chief has put himself in charge of handling half of the ...

When the wealthiest country in the world is unable to produce basic medical gear to cope with a rampaging pandemic, ...

Philippines company to produce millions of facemasks per month

CLARK FREEPORT ZONE, Pampanga, Philippines - With skyrocketing demand for face masks, following a change of experts views on their ...

World Expo in Dubai likelt to be put back by year

NEW YORK, New York - A streak of 113 consecutive months of jobs growth came to an end with data ...

Healthcare for everyone in America needs to be free

Access to COVID-19 treatment is key to helping Americans combat the disease, as well as containing its spread. To their ...

SYDNEY, Australia - It was a downhill day on Asian bourses on Friday, with all the major indices losing ground.The ...