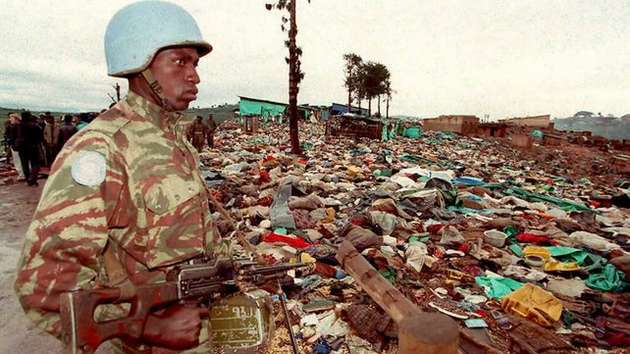 TEL AVIV, Israel - The Supreme Court has rejected a Freedom of Information request to unseal documents that could reveal Israel's support for the Rwandan government during the 1994 genocide.

Justices, Supreme Court President Miriam Naor, Justice Neal Hendel and Justice Yitzchak Amit, while conceding the public had a right to know the facts of the situation, ruled that release of the information and records would be detrimental to Israel's foreign relations.

Human Rights lawyer Eitay Mack and Yair Auron, an Israeli historian at Israel's Open University, filed the FOI request with the Israel Defense Department in 2014. The original request was rejected by a court in Tel Aviv, however Mack kept appealing the decision until it ended up in the Supreme Court.

"There was a major public interest in having the information revealed, and that preventing its disclosure created a feeling that the respondents were preventing it due to extraneous considerations," Mack said.

In their decision, the Supreme Court justices relied on Statute 9 of Israel's Freedom of Information Law, which allows the government to withhold documents if "in the disclosure of the information there is a concern over harming national security, its foreign relations, the security of its public or the security or well-being of an individual."

The Israeli government's justification for reliance on Section 9 was not disclosed as the evidence it presented to the Court was given behind closed doors.

"In Israeli law, there is no legal right that is absolute, and even the right to information is permitted to be passed over in light of other protected interests," the justices determined.

Mack described the Court decision as "erroneous and immoral."

"The State of Israel only loses from it," he said.

Mack did acknowledge the justices recognised the 1994 Rwandan genocide, which earlier courts that rejected the petition did not.

As many as a million Rwandans, Tutsi and moderate Hutus were slaughtered from early April to mid-July 1994, about a fifth of the country's population, following the double presidential assassinations on April 6.

Whilst many of the deaths were caused by machetes and clubs, hundreds of thousands were shot dead. Israel has long been understood to have provided Rwanda with conventional arms including guns, ammunition and grenades despite a UN embargo being in effect at the time.

Yair Auron 12 years ago first called for an investigation into Israel's arms sales to Rwanda during April of 1994. Auron, according to Middle East Eye has spent more than two decades researching Israeli attitudes towards the genocide of other peoples, When he raised Israel's involvement in Rwanda in 2004 he said he had photographs and documents showing that Israeli arms dealers provided Rwandan forces with bullets, rifles and grenades captured from Egypt during the 1973 Arab-Israeli war. Israel denied the claims.

Last week Auron told a district Tel Aviv court: "To send arms to a country where genocide is taking place is like sending arms to Nazi Germany during World War II. We provided arms to Serbia during the embargo, and we provided arms to the Rwandan government, which was committing murder."

ZAK: When did you first think that Isreal had sold arms to Rwanda during the 1994 genocide?

PROFESSOR AURON: I first heard it from an Israeli photographer. He was in Rwanda eight times and he saw the weapons. When I asked him if top leaders were involved in the arms deal, he said yes. When I said, that means [Yitzhak] Rabin and [Shimon] Peres, he told me: "You said it, I didn't. And if you publish it anywhere, I will say that I don't know you." I started to look for more evidence. In our petition we rely, among other sources, on an Amnesty International report that was published in 1995.

The report gives details about the weapons that were loaded at Ben Gurion airport. The list included mostly small arms that Israel captured in the Arab-Israeli war in 1973, as well as Soviet and Chinese weapons that were loaded in Tirana, Albania. The arms were loaded in Israel and in Albania under the supervision of Israeli officers. Later on when attorney Mack and I prepared the petition we came across additional information that verified our suspicions.

ZAK: To your knowledge, did the Israeli government know it was selling weapons that could be used in genocide?

PROFESSOR AURON: THERE was tension in Rwanda as early as January of 1994. Several of the world's most powerful states imposed international arms control regulations and on May 17 1994 there was a UN embargo. Israel breached the embargo, as did Russia, Belgium, South Africa, France, Spain and others. Many of the planes that transported the shipments were British. The last license to export arms was issued by the Israeli Ministry of Defense in October 1993, about half a year before the massacres began.

But some of the shipments were sent between May and July (during the massacres). According to the documents of the Rwandan Ministry of Defence, seven shipments of light ammunition arrived from Israel via Albania between April and July of 1994 for use of the militias that committed the massacres.

ZAK: What did you think would happen if you publicised Israel's involvement in the genocide?

PROFESSOR AURON: I was interviewed on the news on Israeli TV in 2004 on the tenth anniversary of the Rwandan genocide. The anchorman introduced the item using Holocaust terminology, which in Israel is rarely used to describe anything but the Holocaust. He said that when the genocide in Rwanda took place the "world was silent." I added that Israel was part of the world that was silent, and that there are even claims that we supplied some of the weapons. I concluded the interview saying that if the claims are true, these are genocide crimes.

I was sure that by the time I got home from the studio I would be flooded with phone calls and emails from political figures and others who would be concerned, furious or sceptical about this revelation. But there was silence. No one reacted. I confront this kind of denial again and again from the most responsible, moral people. This includes academics, politicians and friends who say to me: "It is not possiblethere could not have been arms sales." Or I am told that I have "gone too far by accusing Rabin and Peres."

ZAK: What is your motivation, what do you hope to achieve?

PROFESSOR AURON: WE want to expose the sources that were connected to the sales because selling arms during an embargo is a crime against humanity. If the International Criminal Court was doing its job, it would have been possible to persecute Israel, France and others. We chose to petition the Israeli courts using the Freedom of Information law, giving every Israeli citizen and resident the right to obtain information from a public authority. Our motivation is moral. These actions are against international law and it is important to expose what happened. We are not so naive as to believe that we can stop arms sales completely.

Attorney Mack is determined to increase transparency and public supervision on arms sales which, needless to say, would be bad for business, harming Israel's economic interests and presumably explaining the state's resistance. He adds that if we want to prevent these evils in the future we need to expose and confront dark chapters of our past. His aim is to make sure that the law concerning supervision on arms sales is implemented. The law forbids arms sales to countries with an arms embargo. In addition he is advocating a new law that will forbid Israel to sell arms to countries with massive human rights violations.

Obamagate is the latest conspiracy theory to be pushed by U.S. president, Donald Trump. It started on the morning of ...

SEOUL, South Korea - The South Korean government on Tuesday launched a 'no mask, no ride' policy on buses and ...

Tensions between Beijing and Washington add to world's Covid-19 woes

BEIJING, China - China said on Sunday that its relations with the United States were "on the brink of a ...

PARIS, May 26 (Xinhua) - French President Emmanuel Macron on Tuesday vowed to massively back the auto sector to help ...

HUAWEI WATCH GT 2e emerges as the bestseller on Flipkart

LOS ANGELES, California - California avocados gained access to the Chinese market as a result of the China-U.S. phase-one economic ...

How can the United Nations sustainable development goals improve health and education, reduce inequality and spur economic growth while the ...